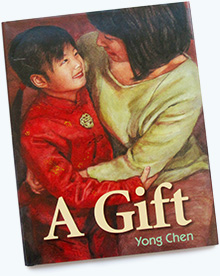 A Gift is a picture book for children ages 4 to 8, published by Boyds Mills Press. Written and illustrated by Yong Chen. Full color illustrations in watercolor. 32 pages.

A surprise for Chinese New Year. A gift has come for Amy, all the way from China. The package has arrived just in time for Chinese New Year, the most important holiday in the Chinese culture. It's a tradition to spend time with friends and family. Since Amy's aunt and uncles live in China and are unable to make a new-year visit, they have sent their niece a special gift that expresses their love and their wish to keep the family together. Read about how this story came to live.

Kindergarten-Grade 2—This simple story begins with a young Chinese-American girl, Amy, receiving a gift from her mother's sister, who lives in China. As her family prepares to celebrate Chinese New Year, a package arrives for Amy. It is a beautiful necklace made from a green stone her uncle found while plowing his fields. He took it to a carver who saw a dragon hidden inside and brought it out. The dragon was strung on a traditional red cord and sent to Amy on the other side of the world. Chen's text is spare but, combined with her luscious watercolors, evokes a vivid portrait of rural Chinese culture. Children will find much to notice and discuss in the illustrations, both in the pictures of Amy's home (with a tabletop orange tree in a pot, a Buddha statue in the garden, red gift envelopes on the table) and those of China (a water buffalo pulling a hand plow, Chinese boats, colorful paper lanterns, people walking with parasols to protect them from the sun). This is an uncomplicated introduction to the holiday and a lovely addition to most collections.—Mary Hazelton, Elementary Schools in Warren & Waldoboro, ME END

Amy’s mother becomes homesick whenever the Chinese New Year rolls around. The postman, though, brings a little bit of her homeland when he delivers a package containing a letter and a stone carved into the shape of a dragon. Warm illustrations intermingle two cultures, as Amy’s American home is imbued with symbols of her mom’s native China—red delicacies, a portrait in the kitchen of her faraway family, a laughing Buddha, and dragon yard ornaments in front of the house. The letter, written in Chinese characters, first appears in a prominent double-page spread, and is then translated and accompanied by illustrations to tell a story within the story of how the stone was unearthed while tilling a field. Amy’s uncle had it carved into a dragon pendant to present to Amy as a symbol of her heritage. Soft-edged watercolors with pastels and splashes of red, which represents good luck, are a perfect complement to this gentle story. Grades K-3. --Patricia Austin

It's Chinese New Year, and Amy and her mother (there's no mention of a father) are preparing for the holiday in their suburban house. Detailed watercolors show the big American kitchen, filled with dishes that Amy's mom is making with her wok and electric rice cooker. Amy is clearly excited about the holiday, but her mom just looks sad, gazing at a family photo. As the very brief story unfolds, a letter arrives in the mail that makes her much happier, accompanied by a gift for Amy: a beautifully carved jade pendant in the shape of a dragon, the "symbol of China." Mom's siblings, a farmer, a fisherman and a nurse living in China, have all contributed to making and sending the gift and letter. The author's note gives some insight into the Chinese New Year, though more information would be helpful. The story succeeds in evoking the importance of meaningful family relationships, especially over a distance. Quietly told, it is probably best for a child and a caregiver to read while sitting close together. (Picture book. 4-7) ForeWord September/October 2009 issue

"Succeeds in evoking the importance of meaningful family relationships, especially over a distance." --Kirkus Reviews

"An uncomplicated introduction to the holiday and a lovely addition to most collections." --School Library Journal